All Collections
Slated Analysis Services
Script & Screening Analysis
How do your readers assess each script?

How do your readers assess each script?

Detailed breakdown of how we think about the ten categories.

At Slated, every script is independently covered by three readers (who are they?), all of whom have undergone Slated's months-long story analysis training process to learn our specific manner of review. In addition to providing a synopsis and three unique loglines, each reader independently evaluates the material's effectiveness in the following Ten Categories, illustrated in the sample table below: 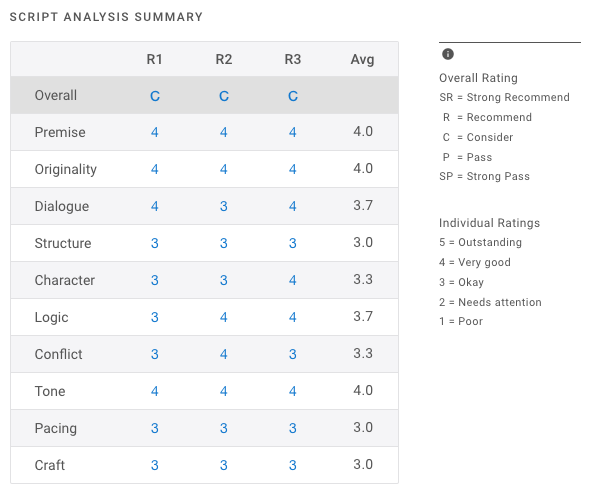 Effectiveness within each category is rated on a 1-5 scale. Numerical scores are not assigned based on how much the readers like the screenplay, nor whether or not they think it will sell. In deciding their scores, readers respond to a number of questions designed to assess the performance of story mechanics in a given section. In the Character section, for instance, the readers evaluate the beats of your protagonist's arc. In Conflict, they'll assess how clearly the internal and external threats escalate and resolve. In Structure, they'll evaluate the overall shape of your story and the function of key turning points. Generally speaking, category scores align with the definitions below.

The readers' points in each section are supported by specific examples from the submitted text or video, complete with page numbers or timecode. Please note: our page citation format indicates tenths of a page. So, "14.6" means "sixty percent of the way down page fourteen."

In addition to assigning scores for individual categories, each reader is asked to issue an overall recommendation for the script (Strong Pass, Pass, Consider, Recommend, or Strong Recommend), supported by an Overall paragraph which summarizes their decision. Generally speaking, a "Pass" is given when the reader feels the script would benefit from further development prior to being shared with producers and financiers. A "Consider" is given to material the reader feels investors could consider financing in its present state, with some reservations. "Recommends" are reserved for screenplays that the reader feels are ready for production, with little or no revision. A "Strong Pass" is issued to scripts whose structure or formatting issues notably distract from the story. A "Strong Recommend" is issued to scripts that not only display a mastery of story mechanics, but are also making award-worthy contributions to their subject matter or genre.

When coverage is submitted, the individual scores and overall decisions are processed by an algorithm which weights each section based on degree of importance. For example, "Originality" is not weighted as strongly as "Character;" nor is "Tone" as important as "Conflict."

Scores and weights are calculated for each reader and averaged evenly to generate a 100-point Script Score. Slated Analytics' Script Score indicates the overall quality of the screenplay in the following ways:

We encourage you to submit drafts of your screenplay during development to help attract the best talent, producers, and investors. You can also submit a filmed cut of your project during post-production to help fine tune before picture-lock, and to attract the best sales companies and distributors.

Want to know more details on the ten attributes?

The following are the ten individual attributes evaluated for each script, as well as a few of the questions the readers consider for each element.

The protagonist's development is central to a script's success, and the main character(s) undergo the most analysis. Readers need to understand the protagonist's emotional motivation and desires before they can invest in his/her journey, and nearly every scene should present information that's relevant in some way to the protagonist's arc. Questions considered in Character include:

The readers thinks of "conflict" as the engine that drives the story, and as such, the central conflict should be universal and permeate the entire narrative. There should also be minor conflicts, which further complicate the Protagonist's struggle. Even minor characters and antagonists generally have conflicts, goals, and dilemmas that often counteract or support the protagonist. Questions considered in Conflict include:

In this section, readers assess the writing itself, as a whole. In addition to general wordsmithery, this is where readers may examine the effectiveness of action description, character descriptions, any overuse of camera direction, "unfilmables," and any cases of grammatical errors, typos, or improper formatting.

Though film is a visual medium, dialogue provides crucial textural reality and plays an important role in connecting the audience to the on-screen characters. Questions considered in Dialogue include:

A good story can be grounded in the principles that govern our reality or it can establish an entirely new set of rules to which the characters and events adhere. In this section, our readers assess how consistently the script applies its own rules and whether there are any gaping plot holes.

It doesn’t matter if “the world” or “mythology” is fantastical or reality-based, so long as the screenplay follows its own logic. That means all questions posed are addressed, strange or fantastical phenomena are explained, and characters aren’t two places at once, nor do they act on information they don’t have. If anything is unclear or contradictory, it’s worth mentioning in the Logic section. Successful movies often have holes in logic or coincidences, but the movies that stand the test of time tend not to.

No screenplay is completely original, obviously, but every script should feel fresh and contribute something original to its genre. "Formulaic" need not mean "clichéd." Even if a concept has been done 100 times before, it may be done again as long as the idea is richly presented and there's a reason for the perspective.

In addition to the premise, our readers also consider the individual scenes, characters and structure. Questions considered in Originality include:

Like the logic category, the readers assess each script's pacing on its own terms. Regardless of whether a story moves quickly or slowly, a well-paced screenplay times its major events so that there is a fair balance of tension and release.

Questions considered in Pacing include:

In this section, the readers assess the major characters and events with a focus on evaluating the central concept of the screenplay itself, as opposed to the execution of the idea. In the coverage, the readers summarize the core concept and opine as to its potential for providing conflict and growth, not its commercial viability.

Questions considered in Premise include:

The readers think of good structure as a plot that presents one coherent and complete story. In other words, does the beginning lead into a middle that leads to a satisfying conclusion? In addition to the story's overall construction, the readers also assess the screenplay's deeper, internal structural elements.

Like Logic and Pacing, what the readers look for in the Tone section is consistency within the world established by the script itself. The easy way to think of this topic might be, "If it's a comedy, is it funny? If it's horror, is it scary?" They also look for tonal elements that are obviously out of place with the rest of the piece, tempered by an assessment of the writer's intention.